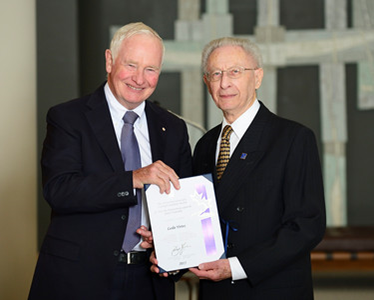 Cummings Centre volunteers, board members and staff are deeply saddened at the recent passing of Leslie Vertes, 98, a Holocaust Survivor, who volunteered at the Centre for over 22 years.

Leslie was a dedicated and tireless volunteer with the Cummings Centre, working in the Holocaust Survivors’ Assistance Office. “In his own warm, caring and gentle way, Leslie sat patiently with survivors, filling out the necessary official papers to reclaim reparations,” said Lynn Gordon, Director of Volunteer Services, noting Leslie’s advocacy work on behalf of Holocaust Survivors. “We are most proud of his contributions and have been most fortunate that he had chosen to volunteer his time at the Cummings Centre.”

Leslie was involved each year in organizing the Remembrance Day Ceremony for the Cummings Centre. His pride was noted in his expressions of appreciation to Canada, calling it the country that afforded him the chance to live freely, in peace, with opportunity. Leslie would also express his gratitude to the soldiers who sacrificed their own lives for the freedom of others, particularly people who were Jewish.

Leslie was so appreciative and proud to have been given one of Canada’s highest honours, the Governor General’s Caring Canadian Award. He received this award in recognition of his contributions as a volunteer not only to the Cummings Centre, but also for his involvement as a survivor, traveling across Quebec to schools as a guest speaker, sharing his personal story and inspiring youth to be caring and compassionate.

Leslie was also the recipient of the Sovereign’s Medal for Volunteers, which incorporated and replaced the Caring Canadian Award, honouring the dedication and commitment of volunteers. He was also acknowledged at a Cummings Centre Annual General Meeting in recognition of his achievements upon receiving this prestigious award.

The Cummings Centre, it volunteers, board of directors and staff wish to convey its sincere condolences to Leslie’s wife Vera, their son George and his wife Joan, and the extended Vertes family.

The Cummings Centre’s mission is to empower and enhance the quality of life of adults age 50 and over by providing dynamic and innovative programs, social services, and volunteer opportunities in a vibrant, respectful, inclusive and compassionate environment. Building on its Jewish heritage, Cummings embraces people from all ethnic, cultural and socio-economic backgrounds.

As the hub of Montreal’s 50+ community, the Centre touches the lives of 10,000 people on an annual basis.

For more information, please contact us by phone at 514-343-3510, online at www.cummingscentre.org or in person at 5700 Westbury Avenue.