Skip to content
Home/Foundation, Volunteer/Helen Scharf: Passionately Devoted to the Cummings Centre at 98

Helen Scharf: Passionately Devoted to the Cummings Centre at 98 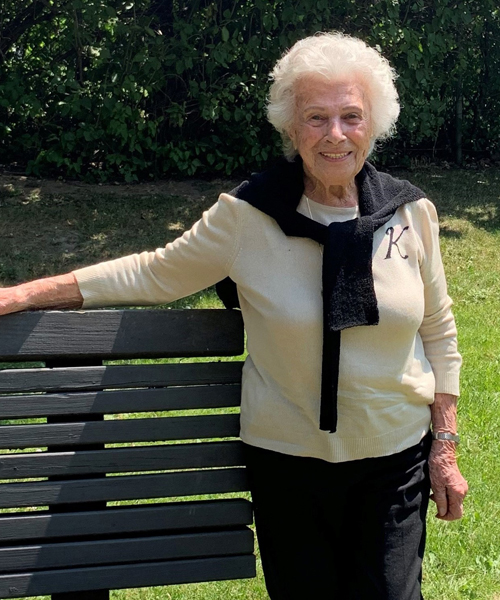 Encountering Helen Scharf’s ebullient spirit and infectious energy, anyone she meets would be amazed to learn that she recently marked her 98th birthday. “I’m still celebrating – I’ll be celebrating the whole year,” Helen says with a smile.

A familiar face at the Cummings Centre for many years, Helen thrives on being active: “I feel great, I feel energetic. I cannot just sit – ever. I multitask.”

Born in Ottynia, a shtetl in Poland (today part of Ukraine), Helen joined cousins in Montreal in 1939, the only one in the family able to get a visa. Tragically, she arrived just three months before the invasion of Poland and there was no time for her family to follow.

Not long after she arrived in Montreal, Helen married and had a daughter then a son. The family also fostered a young woman from Czechoslovakia, who had first been sent to the UK as part of the Kindertransport.

Helen quickly learned English, as well as French, so that she could join her husband in the fur business.

“I came here with five languages so, I thought, what is one or two more?”

In addition to speaking Polish, Ukrainian, Yiddish, Hebrew, German, plus English and French, Helen later added Spanish, attending evening school in Florida, where she lived for 30 years to be near her son. Previously, at home in Montreal, Helen had always worked full time but also found time for volunteer work, including joining friends to raise money for cancer research: “We would go downtown to St. Catherine Street to all the chichi restaurants and nightclubs and go from table to table asking for donations. They would offer us a drink at the bar, we would catch a beautiful show – boy did we have a good time.”

In Florida, Helen continued to give her time to those who needed it. After she babysat for a family with three children while the parents went on holiday, word spread quickly.  “I went from place to place with a little suitcase – like Mary Poppins but without the umbrella. I met such wonderful people, beautiful families.  It was heaven, just heaven.” 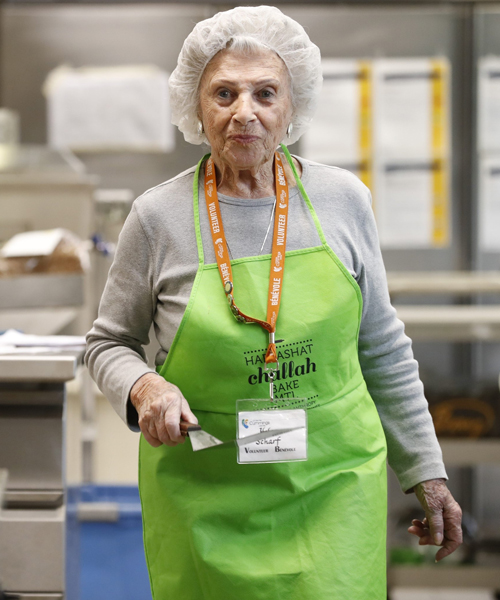 After her son passed away, Helen moved back to Montreal to be close to her daughter once again. A friend invited her to lunch at the Cummings Centre cafeteria, which offered subsidized meals. Helen was eager to help in any way she could, moved and inspired by the clientele who had trouble affording nutritious meals: “I used to come in every morning at 8 am, put on my apron on – making salads, making sandwiches. The people there were wonderful.”

Helen also volunteered with the Centre’s Day Program, which caters to clients with varying needs and health challenges: “Most of these people were much younger than I am but they had many issues which I had not experienced yet – memory problems, confusion. It gave me such a lift to see how much they could do. Vicky [music therapist Victoria McNeill] would bring her ukulele and sing songs – these people remembered every song from way back, all the words… I was always very grateful that I was there.”

While she remains very independent, Helen greatly appreciates her Meals on Wheels from the Cummings Centre, especially during the pandemic: “I am very pleased with it. It’s delivered to the door and I see a volunteer and I get to thank her for what she is doing. A cheese blintz and some sour cream – with maybe a little soup or salad before – and I am happy as a lark.”

Helen occasionally takes advantage of transport services but will still get on a city bus or walk as long as she can. “I like the action. I was always very active – I bicycled, I skiddooed, I skated, I bowled, I danced – I can’t stay put. That’s my demeanor and I’m not going to stop until they carry me away… and I want to be carried like some Greek Goddess on the shoulders of several tall, dark and handsome men!”

We have just concluded another successful Rosh Hashanah edition! Participants sent beautiful holiday cards their loved ones, while their donations helped to ensure seniors in our community are able to enjoy nutritious meals.

A warm thank you to all the generous donors and volunteers who make this essential program possible!

Funds raised through our Foundation help ensure that The Cummings Centre can provide a home away from home for seniors like Helen. Learn how you can contribute by calling 514.734.1825 or see: Ways to Give | Cummings Centre

The Cummings Centre’s mission is to empower and enhance the quality of life of adults age 50 and over by providing dynamic and innovative programs, social services, and volunteer opportunities in a vibrant, respectful, inclusive and compassionate environment. Building on its Jewish heritage, Cummings embraces people from all ethnic and socio-economic backgrounds.

As the hub of Montreal’s 50+ community, the Centre touches the lives of 10,000 people on an annual basis.

For more information, please contact us by phone at 514-343-3510, online at www.cummingscentre.org or in person at 5700 Westbury Avenue.